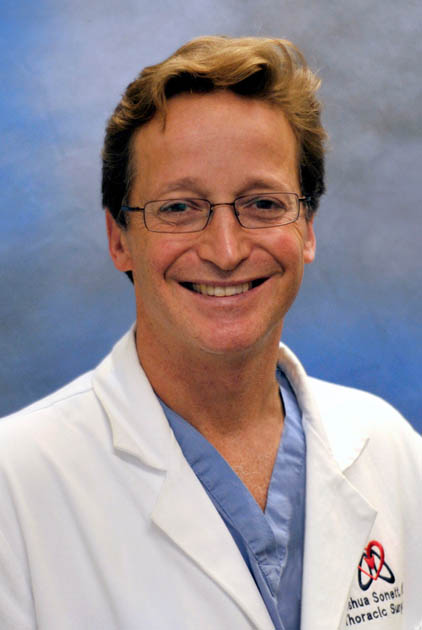 Joshua R. Sonett MD FACS is the Edward C. and Anne K. Weiskopf Professor of Surgical Oncology (in Surgery) at CUMC, Chief of General Thoracic Surgery and Director, The Price Family Center for Comprehensive Chest Care, Lung and Esophageal Center. He is instrumental in making the Thoracic Surgery section at Columbia University Medical Center one of the best in the U.S. and he is one of the youngest professors of surgery at a major academic institution in the United States. Dr. Sonett is best known for his work on the multidisciplinary treatment of lung and esophageal malignancies. Leading work in minimally invasive treatment of lung and esophageal cancer, Dr. Sonett and his team at Columbia are innovators in the development and teaching techniques of Video Assisted Thoracic Surgery (VATS) and Minimally Invasive Esophageal (MIE) surgery, allowing surgeons to incorporate these techniques into their daily practices. Dr. Sonett and his team make up one of the few programs in the country to employ a combination of maximal chemo and radiation and surgical therapies in the treatment of locally advanced lung malignancies. He is also a leader in multi-modality therapies for lung and esophageal cancers, and a pioneer in endo-bronchial palliation of benign and malignant airway stenosis. In the clinical area of lung transplantation, Dr. Sonett is best known for developing an extended-donor lung transplant criteria protocol. Extended donor criteria (EDC) applies to the use of organs that don't meet the usual criteria for transplantation due to various health problems, but are still healthy enough for a successful transplant (Liver MD 2006). Dr. Sonett and his team have been aggressively trying to alleviate the donor shortage by evaluating lungs that may be rejected from other centers (CS News 2005). Between 2001 and 2003, 53 percent of the lungs transplanted at NewYork-Presbyterian/Columbia were extended donor criteria lungs, with no difference in survival between EDC lung recipients and regular lung recipients. The Columbia programs has a 95% survival rate after one year and 83% after three years, which far surpasses the national average of 79% and 62% respectively (CS Lung News 2006). Dr. Sonett has been an invited speaker and principal and co- investigator of numerous clinical trials, author of numerous publications in renown journals such as the Journal of The American College of Cardiology, Annals of Thoracic Surgery, and the Journal of Heart and Lung Transplant, among many others. Dr. Sonett received his MD from Brody School of Medicine at East Carolina University Medical School, and completed his surgical residency at the University of Massachusetts, and Thoracic Fellowship at the University of Pittsburgh Medical Center. Professional Memberships include the New York Thoracic Society, The Society of Thoracic Surgeons, Fellow of the American College of Surgeons and member of the American Association for Thoracic Surgeons Dr. Sonett has received numerous award and honors including annual awards to America's Top Doctors, Castle Connolly America's Top Doctors for Cancer, New York Magazine's Best Doctors, the Barbara Neibauer Celebration of Life Award, Foundation for Thymic Cancer and the Humanitarian Award, Chesed of New Square.